home
Orchestral Suites from the Operas 2 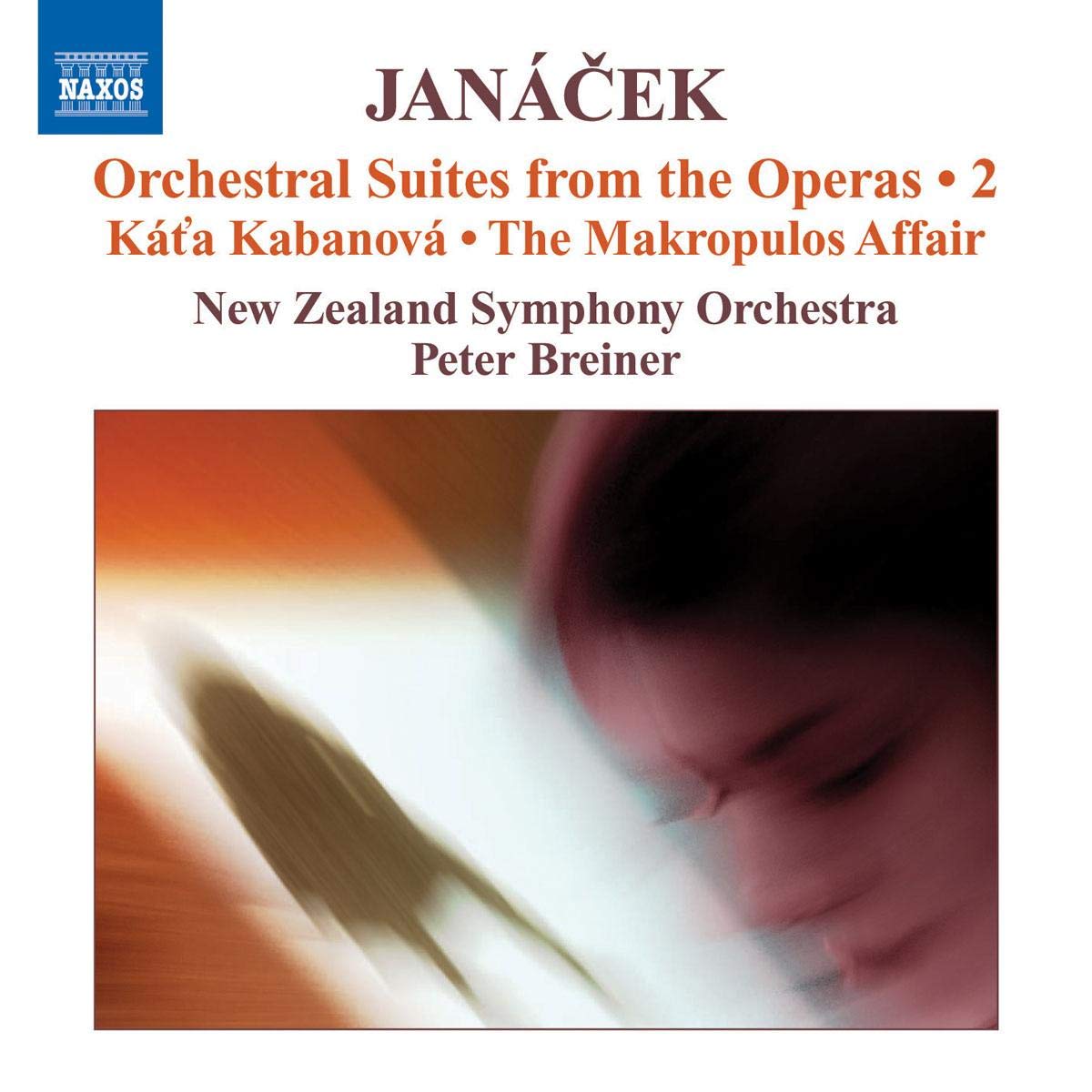 Peter Breiner is a long-standing associate of the Naxos label and has taken more than his share of critical heat from the classical establishment for some of his projects, such as concerto grossi based on Beatles songs and his jazzy cadenzas to piano concertos of Mozart. However, Breiner is Czech, despite his German-sounding name, and has turned his attention to the more germane matter of developing orchestral suites from the operas of arch-Czech composer Leos Janácek. Janácek did not create orchestral suites from his own operas; the familiar suite from The Cunning Little Vixen was cobbled together by conductor Vaclav Talich well after Janácek's death in 1928. Perhaps the reason Janácek himself never broke any concert music out of his operas is that he never realized just how popular they would ultimately become. Breiner is pulling suites from the eight operas not exploited by Talich, and Naxos' Janácek: Orchestral Suite from the Operas, Vol. 2, featuring Breiner leading the New Zealand Symphony Orchestra, includes his extrapolations from Káta Kabanová and The Makropulos Affair.
Janácek's orchestral scoring in his operas is significantly different from that in his orchestral works like the Sinfonietta and the Concertino. He was deeply interested -- obsessed, really -- with properties of speech and carried a notebook with him, taking down phrases he heard in lectures and conversations and utilizing an improvised form of notation to capture the rising, falling cadences of certain speakers. This informed Janácek's approach to vocal writing and in supporting his vocal parts, he often scored very lightly, careful not to obscure the meaning or the speech-derived melody of the singing in his operas. In Káta Kabanová -- a work where this technique is conspicuously apparent -- this leads, in Breiner's orchestration, to some long stretches of rather empty and nebulous passages that cry out for the power of the voice to drive them along. However, the last movement, "The storm is coming," is self-sufficient as an orchestral piece, the pictorial element in Janácek's original being an adequate jumping off point in working up something exciting and engaging. The Makropulos Affair is the more successful of the two suites; given that Karel Capek's play about a 337-year-old opera singer furnished Janácek with a wealth of inspiration for quirky figures, chattering rhythms, and gently comic ideas that are of interest beyond the vocal writing.

Naxos' recording is clear, if a little distant and lacking in punch, but adequate. Breiner's project to render Janácek's operatic music in orchestral garb is worthwhile; if one loves Janácek through his instrumental music, but cannot bear the thought of approaching the operas themselves, Naxos' Janácek: Orchestral Suite from the Operas, Vol. 2, will certainly serve as a good halfway house between the two -- Allmusic.com, Uncle Dave Lewis, May 2009

Peter Breiner, music director of the New Zealand Symphony Orchestra, leads the orchestra in his own arrangements of Orchestral Suites from the Operas of Czech composer Leos Janáèek (1854-1928). These suites, drawn from the operas Katyka Kabonová and The Makropoulos Affair, show Janáèek's imagination at its most fertile and his love of orchestral color at its most inventive.

More than that, much of the vividness of Janáèek's writing is due to his use of what he called "speech tunes," terse motifs based on the pitch, rhythm, and inflections of the Czech language. The repetition of these motifs in his music can have a powerful cumulative effect. Some have gone so far as to term Janáèek "the first minimalist composer," but the ascription is misleading, for he uses repetition in a much more effective way than do today's minimalists to achieve a dramatic impact.

Katyka Kabonová is the tragic tale, drawn from the Russian dramatist Ostrovsky's play "i"The Storm, of a young woman in a provincial town who commits suicide by drowning to atone for her shame in having had an illicit affair. In the suite, the music is appropriately dark and fatalistic, lightened only by moments associated with Katya's brief moment of happiness with her lover Boris and her remembrance of the same shortly before her headlong plunge to her death. Eight beats of the tympani against more harmonious music in the rest of the orchestra in the first movement of the suite symbolize the compelling power of fate in a simple, uneventful life. When Katya's husband Tikhon journeys to market in Act 1, leaving his young bride defenseless against temptation, a searing high note in the strings, against a treacherous sounding reef of woodwinds and brass, signified impending danger.

In Act 2, the calls from their friends to return home when Katya has her fateful rendezvous with Boris are so perfectly realized in the orchestra that one can almost hear the very words (in Czech, of course, which is Breiner's native tongue). The final act of the opera deals with Katya's wandering blindly through a gathering storm of cyclonic power, superbly realized in both Janáèek's writing and the performance of the New Zealand SO, which gets first-rate playing from every chair.

The Makropoulos Affair is based on the philosophical comedy of the same title by Czech playwright Karel Èapek. In the story, Emilia Marty, an operatic diva, is incredibly three and a half centuries old, having lived under various names in different countries, beginning as a Greek woman named Elena Makropoulos. The secret of her eternal youth and beauty, which have resulted in numerous love affairs over the years, is a miraculous potion which is anxious to find again in order to prolong her life.

Peter Breiner's decision to use the music from the final scene, in which Emilia rejects the potion in favor of a natural death and oblivion, makes for an effective device in the six-movement suite, as the main body of the suite unfolds as a series of what would be termed "flashbacks" in cinema. Much of the music is highly lyrical and sensuous, as befits the heroine and her amorous career, with the thud of the tympani (as so often in Janáèek) signifying impending fate. Breiner is quite sensitive to all the elements in the opera, which is romantic as well as satirical in tone, keeping both the piquant and sensual elements in clear perspective. The glorious coda, symbolizing Emilia's decision to embrace death as a release, is beautifully handled here. -- Atlanta Audio Society, Phil Muse, June 2009

These three budget-priced albums aren't only an easy introduction to the radiant sounds made by one of the 20th century's most unique opera composers; they make for an addictive collection of orchestral songs without words. -- The Star Ledger, Bradley Bambarger, December 2009

This second installment in Peter Breiner's series of suites from Janácek operas is more successful than the first. It's particularly exciting to hear the music from Kát'a Kabanova, the composer's most voluptuous (and saddest) opera. Breiner basically follows the course of the action in his five-movement suite, and after a fairly stiff performance of the overture his conducting steadily improves, as (it seems) does the confidence of the orchestra. The long last movement, all from the third act, is very skillfully put together, and the storm music comprising the first few minutes packs the sonic and emotional wallop that it must. Fans of the opera will really enjoy this.
José Serebrier has already made a suite from The Makropulos Case at the behest of Universal Edition, and he recorded it pretty stunningly for Reference Recordings. Breiner's six-movement arrangement is quite different. His decision to frame the piece with the opera's final scene is both smart and effective, though he should have used more of Marty's final monologue when he brings back the same music at the end. He also adapts more material from Act 2 than does Serebrier, and Breiner's willingness to organize the music more freely results in a very satisfying half-hour, much more lyrical and tuneful than you might have thought possible. A very enjoyable disc, overall -- ClassicsToday.com, David Hurwitz, April 2009